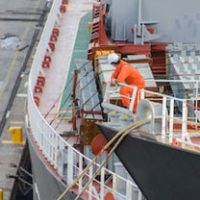 In the days of yore, the standard for determining whether or not a worker could sue their employer under The Jones Act was determined only by whether or not they were exposed to the perils of the sea. While this precedent had been established in one circuit, more recent Supreme Court cases required a stiffer test. Under the old law, ship owners could be held liable for injuries that were not even caused by their own employees, even when those employees were already receiving workers compensation. A recent lawsuit in the 5th District brought the test closer in line with the Supreme Court.

A worker who was not employed by the ship was doing work on the ship when he fell over some metal piping and injured his back and ankle. The worker filed a lawsuit against the ship owner under The Jones Act for failing to provide a safe workplace environment. The lawsuit was dismissed because the worker did not owe his allegiance to the ship. While precedents in the 5th circuit required plaintiffs to only be exposed to the perils of the sea to file a lawsuit against their employer, the new standard will require the employee to actually be a seaman employed by the vessel. The new standard will require a plaintiff to owe substantial allegiance to the vessel as opposed to simply being on it at the time of any injury.

What should have happened?

The attorney taking this case likely expected the past precedents in the 5th circuit to go his client’s way. The problem was that the worker first recovered workers’ compensation and then sued his own employer, which did not own the boat on which he was injured. Since his company did not own the boat, they did not contribute any negligence to the action. The employee could have sued the boat owner under a theory of premises liability, and still likely can, but the lawsuit against his own non-boat-owning employer was tossed.

Lawsuits like this, absurd as they sound, were permitted in the 5th Circuit. Plaintiffs could allege that their employer exposed them to the perils of the sea, file a workers’ compensation claim, and then a lawsuit against their own employer. Rightfully, this lawsuit should be filed against the owner of the boat who exposed a contractor to danger while on the job. Had the plaintiff filed the lawsuit against the owner of the boat instead of his own employer, he likely would have been entitled to compensation.

Payer Law litigates cases on behalf of injured workers whether they file a workers’ compensation claim or a personal injury lawsuit. Call today to schedule a free consultation with our Miami personal injury attorneys and learn more about how we can help.

By Payer Law | Posted on September 24, 2021
We Handle All Types Of Personal Injury Cases