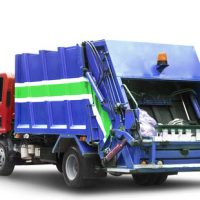 Have you ever heard the myth that if you rear-end someone, you are automatically liable for the accident? While mostly true, it doesn’t apply to cases where someone backs into you. That was the situation for a Miami woman who won a $1.3 million verdict from a sanitation company. According to the lawsuit, the sanitation truck backed into the woman’s car causing spinal and neck injuries.

The lawsuit was filed against Waste Pro of Florida and their driver who the plaintiff argued was negligent for the accident. In this article, we’ll discuss the defense and the verdict.

The defense’s approach to this case was to cloud the liability of their driver and the plaintiff. They argued that the woman had at least 11 seconds from when the truck began backing up to the time it struck her to move her vehicle out of the way. The woman told the court she had come to a complete stop when the truck began reversing, but it just kept coming. The woman suffered major damage to her wrist and reaggravated an injury to her spine that was not symptomatic before the accident. The woman said she was unable to work for months after the accident and that she had to hire a housekeeper to help her around the house.

The defense insisted that the collision occurred at such a minor speed that it was incapable of causing the injuries the plaintiff said it caused. A defense expert said that her condition was aggravated by smoking cigarettes, which delayed the healing process of a prior spinal fusion. The defense concluded that the woman had ample opportunity to avoid the collision and that she was exaggerating the extent of her injuries.

The jury didn’t buy it.

A company does not have to be negligent to be found liable for the conduct of its employee. In this case, the employee backed into someone else’s vehicle simply because they didn’t see it there. While that can happen to anyone, it’s your responsibility if it happens to you. It’s your responsibility to pay for the injured party’s medical expenses, lost wages, and reduced quality of life. For companies, they are vicariously liable for the conduct of their employees when they are on the clock. This means negligence committed by one employee is the sole liability of their employer. Hence, the driver’s negligence becomes the employer’s negligence and the employer is responsible for paying the $1.3 million judgment against their driver.

If you’ve been injured by a commercial vehicle, call the Miami car accident attorneys at Payer Law today to schedule a free consultation and learn more about how we can help.

By Payer Law | Posted on October 7, 2021
We Handle All Types Of Personal Injury Cases