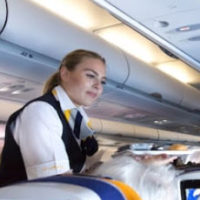 Local 10 News recently reported that a military-chartered jet carrying 143 people crashed in a river at Naval Air Station Jacksonville after the pilot reportedly lost control. While there were no critical injuries, the passengers in the Boeing 737 reportedly experienced chaos and terror as the plane jolted back and forth and oxygen masks deployed before the overhead bins opened and sent the contents spilling out. Survivors credited the relative smoothness of situation to the flight staff who worked quickly to give direction.

What Do Flight Attendants Do?

The role that flight attendants play onboard a flight entails much more than simply passing out peanuts and rolling by with a beverage cart. Flight attendants also conduct preflight inspections of emergency equipment, demonstrate the use of safety equipment and emergency equipment and even administer medical care during in-flight emergencies when needed. They also work long shifts, nights and holidays, and spend many nights away from home. And work does not only take place in the air – the BLS has indicated that attendants usually fly 75 to 100 hours per month and generally spend another 50 hours per month on the ground preparing flights, writing reports, and waiting for aircrafts to arrive.

What Are Common Injuries Sustained by Flight Attendants?

Unfortunately, the nature of a flight attendant’s workplace makes it clear why the occupational injury rate is so high. Even an otherwise minor workplace injury can become severe when it occurs midair and there is no way to get medical treatment quickly. Additionally, flight attendants can come into contact with several hundred people during a single flight, each of who poses a risk of exposure to infectious diseases.

The workplace accidents and injuries suffered by flight attendants can include:

Have You Been Injured While Working as a Flight Attendant?

By Payer Law | Posted on June 28, 2019
We Handle All Types Of Personal Injury Cases