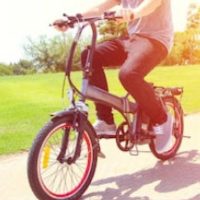 A family has filed a lawsuit against an e-bike company claiming that the bikes are unreasonably dangerous for children. The bikes can achieve speeds of up to 20 mph even without being pedaled. While the owner’s manual says that the bikes are intended for those who are either 4’10” or taller and over the age of 18, the company that sells this particular e-bike showed children using them on their website.

The girl was using the bike when she suffered a severe head trauma that eventually resulted in her death. The family has also filed suit against the manufacturer of a helmet the girl was using at the time of the accident.

The plaintiff and a friend were using the e-bike and rode it up a hill. The plaintiff was a passenger on the e-bike. The bike, thanks to its electric motor, was able to traverse the hill without much effort. However, when the pair decided to descend the hill, the bike began picking up an incredible amount of speed. The bike also began shaking. The rider in control of the bike attempted to apply the rear brake, which failed to slow the bike. The front brake fared no better. The driver lost control of the bike, and both girls were sent airborne.

In this case, the bikes were designed with a disc brake and a quick release mechanism for detaching the front wheel. The combination is a known safety danger in the bike industry. The plaintiff was taken to the hospital but she never regained consciousness.

This is a product liability lawsuit that alleges two major failings. First, the brake system was intrinsically defective and unnecessarily dangerous leading to the death of the rider. Second, there is an accusation that the company sent mixed signals so far as marketing their product to families with children. In this case, the company stated that the product was intended for those over the age of 18 or at a height of 4’10” or more. However, they led their customers to believe that the e-bike was a great gift for children by showing children on the site riding the bike.

How did that happen? Well, the company contracts marketers to lure customers while the lawyers draw up plans to reduce the risk of liability. Obviously, the lawyers never looked at the site and the digital marketing company that provided pictures for the site was unaware that the lawyers had placed this waiver in the manual. Since the waiver was buried in the back of the manual and the children were riding the bike on the page of the website, the marketing team is going to end up costing this company a lot of money.

Nonetheless, the plaintiffs have a valid argument that a design defect made the bike intrinsically dangerous so, the plaintiffs are unlikely to require a decision based on whether the waiver was valid despite the marketing.

Injured on an e-bike? You may have a valid claim. Call the Miami personal injury lawyers at Payer Law today to schedule a free consultation and we can begin discussing your next moves immediately.

By Payer Law | Posted on October 3, 2022
We Handle All Types Of Personal Injury Cases