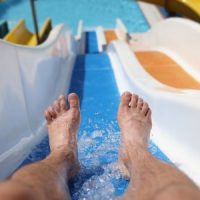 A couple has filed a lawsuit against Six Flags Hurricane Harbor after a multi-person raft overturned. The couple claims that the raft was improperly balanced and one of the riders was improperly placed leading the raft overturning. The lawsuit alleges that the plaintiff was unable to maintain a safe riding position that resulted in the capsizing of the floatation device. The woman was thrown from the floatation device injuring her head, neck, back, and shoulder. The extent of the injuries is unknown, but the plaintiff required surgery and says that she can no longer do activities that she once enjoyed.

The ride operates at great speed. Two to four people are placed on the raft which then descends at 35 feet per second. The park operators are blamed for not training employees to distribute the weight of the riders correctly resulting in one patron being thrown from the raft.

Amusement parks are strictly liable for injuries caused by their rides, according to Florida law. Lawsuits that allege that a defect in the ride or machinery resulted in a serious injury are filed against amusement park owners and the companies that designed the ride. While the plaintiff need not prove negligence, they do need to establish that they did not assume the risk of riding the ride when entering the park. For example, if the ride says that there is a 25% chance you can die, then you would probably assume the risk. But of course, amusement parks don’t advertise the death rate of rides and most folks assume that they will be safe on the rides. They may not, however, assume they’re safe if they have a heart condition that makes going on rides dangerous and risk it anyway for the thrill. In that case, they are assuming the risk that their heart condition can make the ride more dangerous. To make matters worse for the plaintiff, the mechanical issues related to the ride did not cause the injury.

Here, the ride operated safely, but the employees of the park did not ensure that the riders’ weight was evenly distributed causing one individual to be thrown from the raft. The plaintiffs claim that the negligence falls on the park employees and vicariously on the park itself for failing to ensure the safety of their guests by preventing an avoidable problem from arising.

If you’ve been injured on an amusement park ride, chances are good you have a winning lawsuit. The Miami personal injury attorneys at Payer Law can help you file a lawsuit against the theme park operator to recover money related to lost wages, medical expenses, and reduced quality of life.

By Payer Law | Posted on November 29, 2021
Skip footer and go back to main navigation