Workplace Lightning Dangers and How to Avoid Them 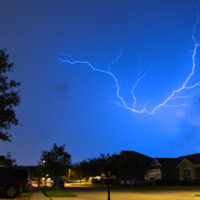 Local 10 News recently published an article asserting that rescue workers in Lauderhill responded after a probable lightning strike struck a construction worker. Authorities told the news outlet that a construction worker who was on the ground while several construction workers were on the roof of an elementary school appeared to have been sent flying about 15 feet after being struck by lightning. The worker was reportedly rushed to a nearby hospital where he was listed as being in stable condition. Neighbors in close proximity to the location where the incident occurred said that lightning was coming down so loudly that their ears were ringing.

While many weather conditions are more likely to be annoying than result in serious harm, lighting is unfortunately a different story as this unpredictable scenario is one of the leading causes of weather-related fatalities. According to the Occupational Safety and Health Administration, cloud-to-ground lightning occurs 20 to 25 million times every single year and over 300 people are struck by lightning annually. This dangerous natural phenomenon has resulted in an average of roughly 50 people being killed by lightning strikes each year during the last three decades. This doesn’t begin to account for the many other people who suffer debilitating injuries as a result of being struck.

And unfortunately, certain occupational factors can increase a Florida worker’s risk of being injured by lightning. According to the Centers for Disease Control, the Sunshine State is, ironically, considered the “lightning capital” of the country, with more than 2,000 lightning injuries over the past 50 years.

Anyone who frequently works outdoors has a heightened risk of dealing with the implications of lighting strikes and other weather-related injuries. Therefore, the workers who face a higher risk for lightning hazards include:

It is imperative that employers have procedures in place to protect outdoor workers in the event of lightning. In addition, workers themselves should be aware of certain things about lightning and should undertake steps to help themselves reduce the risk of an accident by keeping the following in mind:

Lightning strikes are unfortunately a very real risk for certain Florida workers and can have serious health implications. If you have been injured on the job as the result of a lightning strike or any other occupational hazard, you should talk to a workers’ compensation attorney to discuss your rights. As the Miami workers’ compensation attorneys at Payer & Associates, we can help you file for your benefits for the first time or even help you appeal if you have been denied. Contact us today to begin.

By Payer Law | Posted on October 22, 2020
We Handle All Types Of Personal Injury Cases