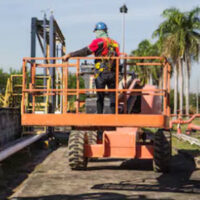 Local 10 News recently reported that a worker had to be rescued from a McDonald’s sign after the lift the worker was in stopped working 100 feet up in the air. Fortunately, the worker was able to reach out for help by using his cell phone. Local fire rescue came to his aid by using an aerial lift of their own.

The worker in this case was fortunate enough not to become injured as the result of the aerial lift malfunction. However, workers in the construction industry face a seemingly endless list of hazards, and an unfortunate occupational reality is that aerial lifts are one of them.

What Are Aerial Lifts?

Aerial lifts are electrically-powered mobile platforms that are used for elevating workers to various heights. Due to their mobility and flexibility, aerial lifts have actually replaced ladders and scaffolding on many job sites.

How Dangerous Can Aerial Lifts Be?

What Are the Causes of Workplace Aerial Lift Accidents?

Causes of aerial lift accidents can include:

How Can Workers Help Reduce the Risk of Aerial Lift Accidents?

While employers have a duty to ensure that aerial lifts are properly maintained and that the workplace is safe, anyone who is operating an aerial lift should undertake measures to help avoid an unwanted accident. Before operating an aerial lift, the operator should always take a look at the lift to make sure the equipment is in proper working condition. If anything appears off about the equipment, do not attempt to operate the aerial lift and instead alert a supervisor.

Injuries warranting workers’ compensation can occur in a single traumatic accident on the job site, such as one involving an aerial lift. Workplace injuries can also result from job duties over the years. Either way, you will likely need competent legal help for a process that can be daunting. Employers and insurance companies frequently deny claims or offer injured workers far less than they deserve for their workplace injuries. An experienced workers’ compensation attorney can navigate the claims process for you and help you ensure that you receive the benefits you are entitled to. As the Miami workers’ compensation attorneys at Payer & Associates, we offer the help and expertise you can depend on for the outcome you deserve. Contact us today to learn more about what we can do for you.

By Payer Law | Posted on January 10, 2020
We Handle All Types Of Personal Injury Cases