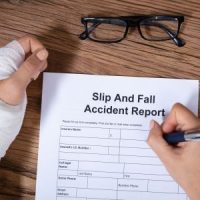 A woman was left with injuries characterized by her attorney as “severe” and “disfiguring” after she tripped over an uneven walkway at Disney’s Boardwalk Resort. The area has since been refurbished, according to Disney. The plaintiff contends that the surface was “decaying” and “uneven” which led to the avoidable injury. The injury occurred where the boardwalk surface met a concrete abutment.

The plaintiff also says that as a result of the injury, she has incurred the burden of medical expenses, been prevented from doing work for which she is employed, and suffered a reduction in her quality of life. The filing indicates that the injuries are either permanent or expected to persist into the near future.

Assessing damages in a slip and fall lawsuit

Damages are directly tied to your injuries. Slip and fall lawsuits run the gamut when it comes to settlements. Some can settle for over $1 million while others are barely actionable at all. If you slip and fall and get a bruise on your bum, you may be able to file a lawsuit, but you won’t recover much money because you have no lasting injuries. In this case, the plaintiff alleges that she suffered permanent injuries from the slip and fall which is not unheard of. As might make sense, older Americans who suffer slip and fall accidents tend to be more severely injured than younger ones.

In cases where the injury is extensive enough to prevent you from working for a period of time, your lost wages are compensable under the law. Further, your medical expenses are compensable. Pain and suffering damages, which relate to physical pain but also emotional pain are compensable. For example, if you can no longer do activities that you once enjoyed because of your injury, you deserve to be compensated for that. Many times, those injured by negligent parties have their quality of life reduced forever. That is also compensable. It all depends on how extensively you were injured.

Payer Law files slip and fall lawsuits on behalf of injured guests of a negligent proprietor. Call our Miami personal injury lawyers today to schedule a free consultation and we can begin discussing your claim immediately.

By Payer Law | Posted on September 16, 2022
We Handle All Types Of Personal Injury Cases