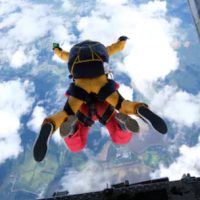 A bucket-list item, a woman and her fiance took beginner skydiving lessons with a Toledo provider but ended up suffering severe paralysis injuries as a result just before her wedding. According to the complaint, the woman expressed concerns over the “static line” which deploys the parachute on its own once the chute is far enough away from the plane. In other words, there’s a static line that attaches the parachute to the plane and deploys automatically so that the skydiver does not have to pull the line themselves.

Employees of the skydive company assured her that it was safe, told her that her Groupon voucher was nonrefundable, and then required her to sign a 9-page liability waiver before she was permanently paralyzed.

While the main parachute is attached to the plane, there is a flare to slow your descent that the skydiver still pulls. As she was falling, the woman flared her parachute as instructed but the instructor yelled ‘no’ over the radio, so the woman unflared her parachute. As the ground approached, she realized that she had to flare her parachute, but by then it was too late. She is now paralyzed from the chest down.

The woman has filed a personal injury lawsuit against the skydive company accusing them of gross negligence, failing to properly train their instructors, and failing to give clear instructions to a novice skydiver.

The skydive company is claiming that its waiver prevents liability from this accident. They claim that the plaintiff was made aware of the danger and signed a 9-page release stating that she assumed the risk of making the jump using the less-safe method.

The waiver essentially says that patrons should not jump if they feel that their training is inadequate. However, they can’t get a refund for their Groupon either. The waiver says that the individual who signs it cannot file claims related to under-instruction, poor equipment, or anything else.

Is the waiver legal?

I can wear a piece of paper that says I am not liable for any injuries I cause and it would not prevent a personal injury lawsuit against me. Similarly, a customer cannot sign away the proprietor’s responsibility to provide safe services. In this case, the company wants the release to prevent any and all lawsuits filed against it. However, it was their employee who issued the wrong instructions to the plaintiff and, if this method of protecting yourself from liability was allowed, then you’d have to sign release waivers every time you entered someone’s store or property. So, in this case, the waiver will likely not prevent the lawsuit from moving before a jury.

Not all waivers are enforceable under the law and companies have a vested interest in discouraging lawsuits. Just because you signed a waiver, it doesn’t mean that you cannot file a suit. Call the Miami personal injury attorneys at Payer Law today to schedule a free consultation and discuss your situation in more detail.

By Payer Law | Posted on December 23, 2021
We Handle All Types Of Personal Injury Cases