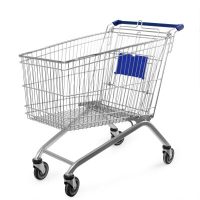 A woman has accused a Walmart employee of violently pushing shopping carts into her body and causing severe injury. The lawsuit claims the woman suffered a brain injury and other injuries resulting from the failure to operate the carts safely. The suit accuses the employee of recklessly operating the shopping carts and failing to look out for customers. The suit is requesting at least $75,000 in damages but is likely to settle for much more than that.

Walmart is vicariously liable for the conduct of its employees. That means if an employee commits negligence and causes someone’s injury, Walmart is liable. Corporate personhood has some downsides. The treatment of the corporation as a single legal entity means that employers are liable for employees who cause injury due to negligence. Walmart will have to fight the complaint and is more likely than not to have to pay for the injuries.

It’s unlikely that the Walmart employee was trying to injure the woman at the time of the injury. It is more likely that the employee was responsible for removing carts from the parking lot and just didn’t see where they were going. The woman was knocked to the ground where she suffered a head injury and various sprains to other parts of her body. She still suffers from some of the consequences of the head injury claiming that she suffers from neurological deficits due to the brain injury.

In cases where the element of negligence is open and obvious and very easy to prove, as would be likely in a case like this, the defense will center around damages. Walmart will expect the plaintiff to prove that her damages are real and are as extensive as she is alleging. Under the general category of brain injury, a mild concussion can qualify. However, the woman is alleging that her symptoms are lingering and/or chronic and she can no longer work as a result of the injury. Thus, she is entitled to recoup medical expenses, lost wages, and compensation for physical and emotional pain and suffering. So, Walmart will get proof of the injuries from the plaintiff along with medical reports detailing medical interventions and ongoing problems that the plaintiff faces after the shopping cart accident.

The only defense that Walmart has is that the victim is somehow responsible for their own injuries. They can claim that the victim was standing in a location that is generally reserved for shopping carts and otherwise “putting herself in the way of” an employee attempting to execute their job. They can go so far as to claim that the woman intentionally placed herself in harm’s way so that she could initiate the lawsuit. However, they will need ample evidence to establish such a defense and there appears to be none. The lawsuit is more likely than not to assert exactly what happened to the woman during her shopping experience. Walmart will likely move to settle the case.

Have you been run over by a cavalcade of shopping carts? If so, you can sue to recover damages. Call the Miami personal injury attorneys at Payer Law today to schedule a free consultation and learn more about how we can help.

By Payer Law | Posted on August 26, 2022
We Handle All Types Of Personal Injury Cases