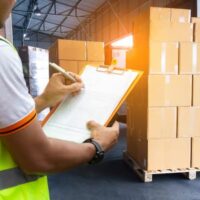 A deliverywoman delivering milk to Walmart has filed a lawsuit against the company after she says their “Walmart First” policies led to a cluttered delivery area that resulted in serious permanent injury. According to the plaintiff, the receiving area had a special place set aside for non-Walmart deliveries. The area was cluttered and Walmart employees never used the hydraulic loading docks that would have safely secured the trucks to the delivery area. The complaint also says that both durable and perishable goods were delivered at the same dock. As a result of this clutter, the plaintiff was forced to set aside docking plates and other delivery equipment which she says she fell over resulting in serious permanent injury.

The lawsuit boils down to negligence on behalf of the Walmart employees for not using the hydraulic loading docks and creating a potentially dangerous situation that resulted in a 3rd-party contractor’s injury.

Immediately following that sequence of events, a Walmart employee approached her asking her what she was doing as she replaced the pallet jack. The employee took the pallet jack from the plaintiff and said that she would handle it.

Because of the clutter in the loading dock area, the plaintiff leaned a dock plate against freight between two loading docks, which is what she always did. The Walmart employee then took the dock plate and pallet jack and set them up for the next delivery person. This was not in accord with Walmart’s usual operating procedure. As the plaintiff tried to step away, she tripped over the machinery causing substantial injuries to her lower back and surrounding areas. As a result of her injuries, the plaintiff claims that she is “permanently disabled”. She is seeking restitution for her medical expenses along with lost wages and pain and suffering damages.

If you’ve been injured due to the negligence of another person, call the Miami personal injury attorneys at Payer Law today to schedule a free consultation and learn more about how we can help.

By Payer Law | Posted on June 25, 2021
We Handle All Types Of Personal Injury Cases