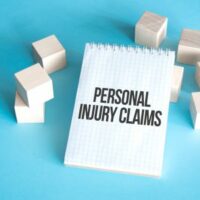 You know that guy with the face tattoos who temporarily became famous after ratting on just about everyone he ever met? Well, that guy is in the news again, this time for hitting a woman’s head with a bottle.

Tekashi69 was at a Miami strip club when someone called him out for being a snitch. Tekashi69 grabbed the nearest thing to him, which was apparently a champagne bottle, and threw it. The bottle missed its intended target and instead struck an employee of the establishment in the head. The employee has now filed a lawsuit against Tekashi69.

The injury was severe enough that the employee required staples to her scalp.

The employee has filed a lawsuit against both Tekashi69 and she has also named the strip club in the lawsuit. Such a lawsuit would be filed under the theory of negligent security.

According to the plaintiff, immediately after the incident occurred, Tekashi69 was ushered out of the building and the employee was asked not to call police. She ignored that request and did report the incident to police. She has named her employer in a lawsuit against both Tekashi69 for throwing the bottle, and the club for failing to provide adequate security when the rapper entered the building.

Maybe in California, but exotic dancers are not necessarily employees of the club where they dance at. Often, they are considered contractors under the law. While an employer is required to provide workers’ compensation insurance to all of their employees, employers are not required to provide workers’ compensation insurance for independent contractors. If the exotic dancer was classified as an independent contractor, she may be able to file a lawsuit against the club.

Why? Well, the incident was traumatizing, requiring that she go to the hospital, and she may have a permanent disfigurement since hair won’t grow where her scalp was scarred. Those are significant damages to claim and none of those damages would be compensable in a workers’ compensation claim. Only her hospital expenses and a percentage of her lost wages could be compensated. So hopefully, the young woman is classified as an independent contractor for the sake of her personal injury lawsuit.

If you were injured, don’t hesitate to reach out to us for help. Call the Miami personal injury attorneys at Payer Law today to schedule a free consultation and allow us to begin building your case immediately.

By Payer Law | Posted on May 20, 2021
We Handle All Types Of Personal Injury Cases