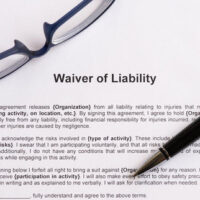 As a student-athlete, your child may be forced to sign an injury release waiver. Indeed, these sorts of waivers are commonplace. As an example, you’re forced to sign a waiver every time you seek medical attention. However, the law permits you to sue your doctor. That is not necessarily the case with student-athlete releases. A recent lawsuit in Florida sheds light on the issue.

The Third and Fourth District Courts both ruled that a pre-injury student-athlete release form signed by both the student and their parent is enforceable. This means that injuries that arise from events related to their athletic activity cannot have standing in court, if such a release exists. Applied broadly, this ruling will apply to any student-athlete who signs a release.

A lawsuit involving a high school cheerleader was filed in the Third District in Florida. The cheerleader sustained injuries during practice and alleged that the school was negligent for failing to place mats on the floor, failing to conduct adequate preparation, using unskilled and untrained staff to supervise, among other allegations. The cheerleader and her parents had signed a release waiver. Even though elements of negligence were alleged and were not ruled against per se, the lawsuit was kiboshed by the release waiver and the student was unable to pursue the lawsuit after the decision.

A lawsuit involving a soccer game moved forward to the courts after a player was injured during an attempt on goal. The player was knocked off the ball by another player and ended up falling on hard cement. The parents sued the school for their children’s injuries saying that they were negligent in not fixing the hard cement so close to the soccer field. The court ruled that a liability release barred negligence claims against the school.

Your children sign a much different release waiver. Unlike doctors whose releases cannot prevent a medical negligence lawsuit, the releases your schools are providing to their children mean that schools do not have to concern themselves with negligence or safety. Obviously, something has to give. It usually takes an especially egregious case of negligence to push change, so when that tragedy happens, you’ll likely see limitations placed on injury waivers.

If you or your family member has been injured due to the negligence of another individual, company, or government agency, call the Miami personal injury attorneys at Payer Law today to schedule a free consultation.

By Payer Law | Posted on August 27, 2021
We Handle All Types Of Personal Injury Cases