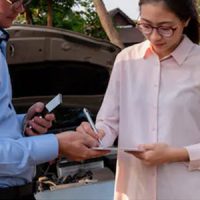 The survivor in a traffic accident that killed seven people has filed a lawsuit against the State’s DMV for failing to process out-of-state license suspensions that would have prevented the driver who caused the accident from taking the road. The commercial truck driver who caused the accident was one of tens of thousands of out-of-state suspensions that were never processed in the state.

The plaintiff was on a ride with his motorcycle club, a group of former marines who called themselves the Jarheads MC. In the opposite direction, a pickup truck hauling a flatbed trailer veered into their lane striking the bikers. Seven people were killed. The plaintiff suffered extensive injuries to his pelvis and lower body. He has since undergone 24 surgeries to repair the damage.

The lawsuit alleges that the commercial truck driver refused a chemical test in Connecticut which would have automatically suspended his CDL in Massachusetts. States share this information to prevent drivers from accruing DUIs in one state from then keeping their license in another state. In this case, the State of Connecticut sent the State of Massachusetts notice of the suspension and because of longstanding lapses at the DMV, the notice was never processed resulting in seven deaths.

The plaintiff believes that the registry should be held accountable for this failure. They characterize the issue as willful human negligence.

While you may be a big fan of the Sons of Anarchy television show, the majority of bikers do not run guns for terrorist organizations. It’s simply a men’s club that they operate together. In this case, the injured biker was a registered nurse who worked at a hospital, not a full-time outlaw. As a result of his injuries, he is no longer able to perform nursing duties and must instead work for an insurance company at a desk making a fraction of what he made before. That loss deserves to be compensated alongside his medical expenses, lost enjoyment, ongoing pain and suffering, and life-altering limitations.

To strengthen the plaintiff’s lawsuit, the plaintiff has an alert issued by the National Traffic Safety Board (NTSB) cited “systemic deficiencies” and “inaction to rectify a known problem”.

The driver, meanwhile, is facing seven counts of reckless homicide, driving under the influence, and related offenses. He has pleaded not guilty to the charges. He remains in jail as of the writing of this post.

It is unclear that the State of Massachusetts will allow itself to be sued for gross negligence, as such lawsuits against the state are typically not allowed. State governments can never be sued for punitive damages and no one who was involved in the lapse will face individual liability for the deaths.

If you have been involved in an accident with a commercial vehicle, call the Miami personal injury lawyers at Payer Law today to schedule a free consultation and discuss your next moves in greater detail.

By Payer Law | Posted on February 14, 2022
We Handle All Types Of Personal Injury Cases