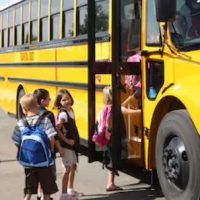 While most are excited about football, fall, watching the colors change on the trees, and Halloween, your friendly neighborhood personal injury lawyer knows that this season is all about school bus accidents and injuries. Already, there have been several articles concerning school bus deaths including a man on a motorcycle who was negligently killed by a school bus driver and a child who was run over by a school bus after he was dropped off. These cases are infuriating because they often involve preventable injuries to minors.

The extent of the child’s injuries is unknown, but a recent lawsuit filed in Texas makes similar allegations against a school bus driver who struck a child shortly after the child got off the bus, killing him. In that case, the parents have sued both the school district and the manufacturers of the bus for failing to place a crossing arm on the front of the bus that would have prevented the child from walking in the bus’s blind spot.

In the case of the wrongful death lawsuit, the families filed suit against the school bus manufacturer for failing to place a crossing arm in the front of the bus that would have prevented the driver from running over the child he had just dropped off. In the case of the personal injury lawsuit, the family has filed the lawsuit against the school district, which means they’ll be suing their local government for compensation. Since the school district had a policy of ensuring each child had crossed the street before the bus left and this policy was not followed, their claim against the government is actionable.

The majority of school bus injury lawsuits are filed because negligent drivers fail to obey department policy, ensure that their students are where they need to be, or they fail to account for the vehicle’s size. In these cases, lawsuits can be filed against the bus driver, county, bus company, or even the bus’s manufacturer if the bus was defective in some way.

Injured by a school bus? Call the Miami personal injury lawyers at Payer Law today to schedule a free consultation and learn more about how we can help.

By Payer Law | Posted on November 18, 2022
Skip footer and go back to main navigation