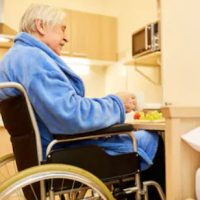 A man recently won a protracted battle against a nursing home over the death of his mother, 88, who choked on a clam. The mother had been at the nursing home for only 14 days following hip surgery. She was on a granulated diet at the time and was not allowed to eat whole food.

The nursing home, in response to the allegations against its staff, stated that they do not serve clams, were not responsible for the clam, but also, that despite a medical examiner ruling that the cause of death was asphyxiation, tried to convince a jury that she died of a seizure.

Two arguments that don’t fit together

Having “a defense” is something specific in a trial. You can go into a trial without a defense. In that case, your defense is simply, “I didn’t do it.” A defense attorney may pick apart the prosecutor’s arguments, but they never offer a competing theory of what happened. In some cases, they posit multiple theories of what could have happened. In some cases, those two theories appear to cancel each other out or diminish one another somehow.

Take for instance, the two competing theories raised by the defense at this trial. Firstly, they stated that they didn’t serve clams. That would force the plaintiffs to figure out how the decedent got ahold of the clam. If they couldn’t prove that it was a staffer who gave the woman the clam, then they likely couldn’t pin the liability on the nursing home. In other words, they didn’t need to also argue that the woman didn’t choke to death as the medical examiner claimed. They could have just said the clam didn’t come from us, so we’re not responsible.

The second argument disputing the medical examiner’s findings may have cost the defense this trial. Why bother disputing the cause of death when you believe you’re not responsible? It’s an extraordinarily weak argument with an extraordinarily low payoff. However, defense counsel may have taken the tack that they did not need a consistent theory of what happened. Nonetheless, juries don’t like it when defendants in personal injury lawsuits dispute medical expert testimony with baseless speculation.

Delay in getting help?

Let’s say that the woman materialized the clam out of thin air, ate it, and proceeded to choke on it. Would the nursing home be liable? No, probably not. However, the plaintiffs could argue that there was a delay in getting emergency responders to the scene which would have saved the woman’s life. Even if the clam came from elsewhere, the plaintiffs may have been able to argue that the nursing home didn’t respond to the patient’s distress quickly enough. There was an apparent delay in calling 911 after the woman was found unconscious.

Payer Law files lawsuits on behalf of families who have lost loved ones to nursing home negligence. Call our Miami personal injury lawyers today to schedule a free consultation and learn more about how we can help.

By Payer Law | Posted on December 9, 2022
We Handle All Types Of Personal Injury Cases