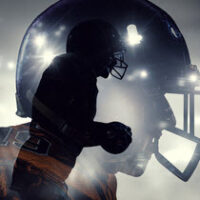 What if I told you that, on average, black people have a lower IQ than white people and thus, when they suffer injuries that affect their cognition, should be compensated lower than their white counterparts because they’ve lost “less” intelligence? You would accuse me of being overtly racist, and you would be right to do so. Nonetheless, that’s how the NFL, a self-purported bastion of social justice, handles concussion claims.

Now, righteous indignation has taken the place of cautious alliance and former black players are filing a lawsuit against the NFL over “racial norming”.

What is racial norming?

Instead of having one standard that is applied to all individuals, the NFL’s claim manager has two separate standards that apply to whites and blacks differently. Let’s say that the average IQ for a white player is 100 while the average IQ for a black player is 90. If a black player is tested at 80 after his career is over, the insurance adjuster will say that he lost 10 IQ points. The entire thing is ridiculous and arguably evil. Yet even as the NFL has taken up the banner for anti-police violence, its claims manager is setting racial justice back 80 years.

How does racial norming work?

In order to file a claim on the fund, you must show that you lost cognitive ability. Since black men are assumed to start lower than white men, their claims are easier to refuse because it’s assumed that they haven’t lost enough intelligence.

Attempts to outlaw the practice on legal grounds, such as civil rights actions, have not been met with success. This is largely because only the government or an employer can be sued for discrimination. The main issue is finding a relevant law that the practice violates. Thus far there haven’t been any. How insurance adjusters reach their decisions is a work product and may be covered by the First Amendment. That doesn’t mean that players can’t sue the fund or file appeals, but it does mean that black players have more hurdles to overcome than their white counterparts, which is unfair. Of course, unfair does not mean illegal.

As former players and families attempt to sue the fund to overturn the practice, the NFL has been remiss to turn over data concerning how many black players have been denied compensation for having lost too few IQ points. Since the NFL is an employer, it stands to reason that they might be held accountable for discriminatory compensation practices. However, since their fund is managed by outside counsel, there is another blurry line that black players must hurdle to get the compensation they are entitled to under the terms of the concussion settlement.

By Payer Law | Posted on August 20, 2021
Skip footer and go back to main navigation