Man Loses Wife And Daughter In Accident With Fire Truck 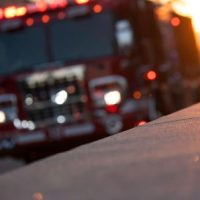 A man has filed a lawsuit against the city after his vehicle was t-boned by a fire truck killing both his wife and daughter. The man alleges that the vehicle had the right of way when the fire truck came screaming through the intersection and broadsided the car. The car flipped several times and traveled at least 70 feet before coming to a stop. His wife was killed instantly and his daughter died two days later at the hospital. A third person was injured in the crash but survived. He has since filed a wrongful death lawsuit against the fire department and the city alleging that the traffic lights were improperly coordinated and firefighters lacked the training to navigate busy streets in an emergency.

The fire department maintains that sirens and lights were on at the time of the crash. The lawsuit failed to elaborate on how failed training and maintenance issues related to the crash in question. The fire department likewise did not respond to questions regarding the crash noting the pending lawsuit as their primary reason. They simply stated that failed maintenance and issues with the traffic system appear to be an unlikely culprit. There have been no disciplinary actions taken against the driver of the fire truck.

Whenever a vehicle is struck by an emergency vehicle, there is going to be an investigation into what caused the crash. In this case, we are light on details. The plaintiff contends that his wife had the right of way and the light was green as they attempted to traverse the intersection. Meanwhile, the fire department contends that their sirens and lights were on at the time of the crash.

Drivers are expected to stop their vehicles when they hear sirens and determine where the emergency vehicle is going. Failure to do so can result in a traffic violation. If the victims violated the traffic law when the accident occurred it will be very hard for them to prove liability against the government.

On the other hand, emergency vehicles are expected to slow down when traversing intersections to avoid this type of event from occurring.

Issues related to suing the government

It’s harder to prove your case against the government than it is to sue a private citizen. The government has immunity from certain types of tort lawsuits, so they can claim that the firetruck driver was performing their duty at the time the death occurred. Negligence resulting from the performance of a government duty is generally quite difficult to sue for unless you can prove that the negligence emerged from a violation of department policy.

Payer Law files truck accident lawsuits against negligent drivers and the companies they work for. Call our Miami personal injury lawyers today to schedule a free consultation and we can begin discussing your case immediately.

By Payer Law | Posted on August 30, 2022
We Handle All Types Of Personal Injury Cases