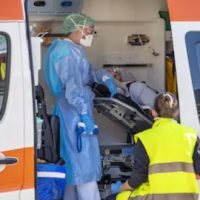 The daughter of a 56-year-old man who died of a heart attack has filed a $100 million lawsuit against the country fire department after she alleges EMTs refused to help her father. According to the lawsuit, a call was made after the man went into cardiac arrest at a health care center. EMTs arrived, but refused to enter the health care facility citing a COVID-19 protocol. Bodycam footage shows them standing around doing nothing while the man was dying inside of his home. Nurses from the clinic begged the paramedics for help but said they would not render aid until the man was brought outside. The man was in the far end of the clinic in a room. Eventually, a police officer rushed into the clinic and helped push the man out of the clinic on a bed with no wheels. By then, however, the man was too far gone.

Can the family win this lawsuit?

It’s hard to say. Filing a lawsuit against a fire department for negligence is possible, however, the negligence has to be open and obvious. In this case, the EMTs conduct was not negligent, the department’s policy was negligent. The EMTs will argue that they did exactly as they were told and are now suspended for obeying orders. When a government employee commits negligence, the government is sued as their employer on the concept of respondeat superior. But the government employees didn’t commit negligence. They adhered to a misguided policy put in place by their superiors. Since the policy was negligent, and not the employees, it may be much more difficult to sue the government for this situation. Nonetheless, the policy will likely change as a result of this lawsuit.

You can sue the federal government under the Federal Tort Claims Act, but each state has its own rules when it comes to suing the state government or any of its municipalities. These rules exist to exclude the vast majority of lawsuits from ever being filed. In other words, whether or not the suit is permissible will depend on state law. The government usually does not allow citizens to sue over legislative policy choices even when those policy choices end up injurious. For that reason, this lawsuit may be dismissed in court, or not, depending on the state’s rules.

Paramedic lawsuits such as these do get resolved in favor of the plaintiff, but generally with awards no greater than $200,000 in the State of Florida. In this case, if the suit was tried in Florida, the fact that there was a policy in place prohibiting EMTs from entering certain places would preclude a negligence suit against the paramedics and the government.

Payer Law represents the interests of those who have been injured due to the negligence of another party. Call our Miami personal injury lawyers today to schedule a free consultation and we can begin discussing your claims immediately.

By Payer Law | Posted on May 12, 2022
We Handle All Types Of Personal Injury Cases