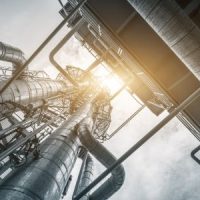 Two contractors have filed a $10 million lawsuit against Exxon after an explosion in their Bayside factory caused them serious injuries. The pair were tasked with repairing a leaking pipe that contained the flammable gas naphthalene. According to the lawsuit, a bolt became stuck prompting one of the workers to use their wrench like a hammer. The obvious happened. A spark flew igniting the gas.

In a situation like this, another worker would be tasked with spraying the area to snuff any sparks that could occur before they got hot enough to ignite the gas. That didn’t happen, in this case. The two contractors were forced to make a jump of 20 feet to avoid further engulfment in the flames. They suffered head and orthopedic injuries as a result of the fall. They also suffered severe burns to their bodies.

The lawsuit against Exxon cites gross negligence. The plaintiffs claim that Exxon failed to obtain proper safety equipment prior to the work being performed.

Exxon, on the other hand, is accused of getting the permit for the work prior to ensuring that they had the proper materials and personnel to do the job properly. A lack of safety equipment and job materials is cited as one of the reasons why the accident occurred in the first place. The lawsuit states that the plaintiffs were never issued flash suits, face shields, or monitoring equipment that could have tested the combustibility of the gas. Lastly, the unit tasked with repairing the pipe was composed of both workers from Team Industrial and the plaintiff’s employer, which is contrary to proper procedure. The men were working alongside two other men that they did not know. Obviously, their safety standards were quite low.

The defendants will claim that the workers should have known that the area should have been sprayed while it was being dislodged. They will blame the workers for the accident claiming that they failed to follow safety protocols and thus bear some of the blame. While potentially convincing, the argument won’t eradicate the named defendant’s allegations of negligence. Some of the negligence, however, may be assigned to the workers diminishing their recovery.

The likely outcome of this lawsuit is a verdict in favor of the plaintiffs for some percentage of their damages. If the plaintiffs succeed on a gross negligence claim, the plaintiffs would be entitled to all of the punitive damages awarded.

Talk to a Miami Personal Injury and Work Injury Lawyer

You can file lawsuits over the on-the-job injuries, just not against the individual who signs your paychecks. Work injury lawsuits include claims against contractors, vendors, manufacturers of industrial equipment, and others who can place dangers in a workplace. Call the Miami workers’ compensation attorneys at Payer Law today to learn more about how we can help.

By Payer Law | Posted on January 21, 2022
We Handle All Types Of Personal Injury Cases