How Sanitation Workers Can Stay Safe While Working 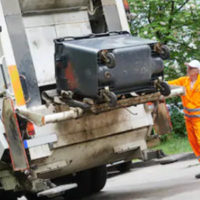 The Miami Herald recently reported that a South Carolina sanitation worker has died after what the Anderson County coroner called “a freak accident.” The 49-year-old man was apparently gathering trash cans just after 6 a.m. on a recent weekday morning when he fell and was hit by the garbage truck he worked on. The truck driver somehow lost sight of him as he was walking along the driver’s side and the worker was run over by the truck as it was backing up. The worker became trapped under the weight of the truck and had to be pulled out by members of the fire department before being pronounced dead at an area hospital a short time later.

How Often Are Sanitation Workers Injured?

According to the Centers For Disease Control, during one twelve-year period, 450 workers who were 16-years-old or older died in incidents related to waste collection. An overwhelming majority of 67 percent of these incidents were vehicle-related.

Regardless of the profession a worker is employed in, every employee deserves a safe working environment. And while employers should undertake efforts to keep workplaces safe, it is also important that sanitation workers implement safety measures to help contribute to their own safety. These measures include actions such as:

What Options Does a Sanitation Worker Have After Being Injured on the Job?

Unfortunately, due to the nature of a sanitation worker’s job, he or she can literally be injured anywhere while traveling through the city picking up waste. Those who are employed while injured are generally able to pursue workers’ compensation benefits. These benefits can cover medical costs and provide disability income whenever an employee can prove injuries or illnesses are due to performing work tasks. Obtaining the help of an experienced workers’ compensation attorney can help ensure that these benefits are obtained as quickly as possible.

Have You or a Loved One Been Injured While Working as a Sanitation Worker?

When a sanitation worker is hurt on the job, we understand that it often results in time spent away from work recovering. We also understand that in reality, this can even mean that an injured worker incurs medical expenses while losing money at the same time – and this affects not only you, but the family members that love and support you. This situation can create very understandable feelings of frustration and confusion for everyone impacted. The good news is that you are generally able to recover workers’ compensation for injuries incurred at work during the scope of employment. However, many people find the process of obtaining these benefits easier and more successful when they have obtained the help of an experienced workers’ compensation attorney. As the Miami workers’ compensation attorneys at Payer & Associates, we are ready to help you obtain the benefits that you deserve. Begin by contacting us today.

By Payer Law | Posted on August 6, 2019
We Handle All Types Of Personal Injury Cases