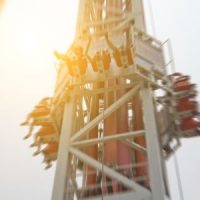 ICON Park has made the decision to shut down the free-fall ride that caused the death of 14-year-old Tyre Sampson. Sampson was a large young man who excelled at football. Already over 300 lbs at the age of 14, he had a career on the offensive or defensive line of any football team in the U.S. to look forward to. His size was partly blamed for his death.

However, the park was also blamed after making manual adjustments to the ride which essentially turned off a safety warning. It is also believed that the boy was too large to safely enjoy the ride, something that park officials should have known about prior to allowing him on.

The unfortunate incident resulted in national headlines and commemorations of the young man who had so much potential. Today, his parents continue to fight for his legacy. Part of that legacy will be ending the free-fall ride that caused his death. The ride has been permanently shut down.

Essentially, amusement parks are strictly liable for injuries caused to customers. That means that the customer does not need to prove negligence necessarily. It means that their injury was caused by the ride (as opposed to their own conduct). It’s a lower bar for proof and in most cases, plaintiffs end up caught in the middle of the ride’s manufacturer and the theme park blaming each other for the accident. This, of course, is much better than being blamed yourself for the accident. In a case where two defendants are blaming each other, you at least know that one of them is going to end up liable.

In this case, the ride manufacturer can blame the theme park for making manual adjustments that turned off safety features while the theme park can blame the manufacturer for not grading the ride’s weight capacity. In this case, the victim slid underneath a strap which should have been locked in place. The ride should not have moved without the strap in place. The ride was manually adjusted to allow it to move forward without the safety guard. The plaintiffs contend that the ride could have been made safer with a $22 seatbelt that ensured riders were strapped into place. As it stands, the harness was unable to clasp into place allowing the boy to slide out from under it and fall to his death.

The manufacturer of the ride is further liable because in the operation and maintenance manual, they argued against the installation of seatbelts. However, the security system that prevents the ride from operating when all of the clasps are not in place was turned off. Obviously, the two defendants blame each other because they are both at fault for this death.

Payer Law represents the interests of Miami residents who have lost loved ones to negligence or been injured themselves. Call our Miami personal injury lawyers today to schedule a free consultation and learn more about how we can help.

By Payer Law | Posted on December 15, 2022
We Handle All Types Of Personal Injury Cases