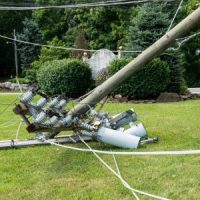 The estate of an 85-year-old woman filed a wrongful death lawsuit against a power company after the company failed to send a tech to her home. The woman had reported a downed power line, but the company responded 12 hours later. By then, it was too late.

To make matters worse, a tech who was on call the day of the fire serviced a home with a blown fuse prior to taking a 45-minute lunch break. The woman had called twice prior to report a live electrical wire had been taken down by branches.

The lawsuit centers around whether or not the electrical company’s response was appropriate to the situation. A representative for the company testified that even knowing that a death would result from the choice, he still would have maintained the same order or responses to the calls. In other words, the company maintains that servicing the blown fuse prior to the downed powerline was the correct thing to do.

The powerlines in your neighborhood are under the direct control of the semi-private companies that work on government contracts to provide power to the masses. The companies have a duty of care to ensure that the power lines are safe. In other words, they have to respond to service calls in a timely manner and if they don’t, they could be held liable.

In a lawsuit like this, the plaintiff simply states that the power company failed in its duty of care and an avoidable injury or death resulted from that failure. How does the power company defend themselves from these allegations? They have to establish that their conduct was reasonable, met regulatory requirements, or met contractual obligations. If they can establish that their conduct was reasonable under the circumstances, they can defeat the claim. In this case, it may be difficult to convince a jury that a blown fuse was more pressing than an active powerline touching branches and homes. The company maintains that they were understaffed that day, and that the woman had about 11 calls in front of her. However, her call was somehow deprioritized even after she called a second time.

In this case, the company did have a policy of servicing high-priority hazardous situations within 6 hours of the first call. In this case, no one came to the home until 12 hours, and by then the woman was dead. Essentially, the woman’s home was burning down as the tech on call was servicing a blown fuse.

The jury will likely come down in favor of the plaintiff in this case. The company is not doing a great job of explaining why a blown fuse needs a higher priority than a downed powerline.

If you have been injured or lost a loved one to the negligence of another party, you are entitled to file a lawsuit to recover damages. Call the Miami personal injury lawyers at Payer Law today to schedule a free consultation and we can begin discussing your options immediately.

By Payer Law | Posted on May 27, 2022
We Handle All Types Of Personal Injury Cases