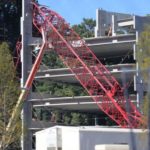 Crane accidents are one of the most deadly construction accidents that occur in the State of Florida each year. Most crane collapses result in serious personal injury and even death of workers as well as anyone who comes into the path of the falling crane, crane boom (see photo) or its cargo.

In the news recently was a crane accident that occurred in New York City. This crane collapse resulted in the death of David Wichs, a 38 year old man. Additionally, three others were injured. In response to the crane accident NYC Mayor de Blasio began an immediate investigation in order to review the events surrounding the accident and to find out exactly what caused this fatal accident. While he stated the investigation is underway, he also cautioned that the investigation will be complex and will therefore takes weeks or months to complete.

In a 2008 report by the Bureau of Labor Statistics that looked at the year 2006 (the most recent data year available), there were 72 crane-related fatal occupational injuries. Additionally, they reported that on average there were 78 fatalities in crane accidents per year from 2003 to 2005.

Crane accidents happen for many reasons including but not limited to the negligent operation of a crane outside the manufacturer’s recommended safe lifting capacity. Additionally, crane booms can fail and collapse due to many things like negligent operation of the crane, overloading, improper assembly procedures, and improper rigging. Crane accidents frequently result in very serious injuries, sometimes fatal, to workers and bystanders who are struck by the crane, its boom or their cargo loads.

Having handled many crane accident cases in the past 20 years I understand these types of cases and the many potential causes of action that result. In Florida most injuries to employees working on the job site where the crane accident occurs would be limited to the benefits provided in a workers’ compensation claim as their employer would most likely be entitled to workers’ compensation immunity under Florida Statute §440.11 which provides: “The liability of an employer… shall be exclusive and in place of all other liability, including vicarious liability, of such employer to any third-party tortfeasor and to the employee, the legal representative thereof, husband or wife, parents, dependents, next of kin, and anyone otherwise entitled to recover damages from such employer at law or in admiralty on account of such injury or death.”

However, any bystander or passerby not working on the job site would be entitled to file a negligence claim against the following possible parties: crane operator, crane owner, crane designer, the crane assembler, carrier and possibly other entities materially involved in the construction project. The major difference with the later type of negligence or tort claim is that if the defendant is found negligent the injury victim would be entitled to additional non-economic damages including: past pain & suffering and future pain & suffering. These additional damages available under Florida’s tort laws can be substantial as non-economic damages for pain & suffering and loss of enjoyment of life can be in the millions of dollars depending on the injuries and facts of the case.

If you have any questions about this blog or if you or a loved one was injured in a crane accident or other type of construction accident please call me for your confidential free consultation to discuss your case.

By Payer Law | Posted on February 22, 2016
We Handle All Types Of Personal Injury Cases