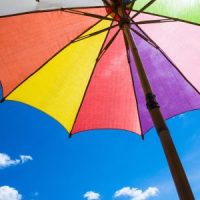 Beach umbrellas are large and heavy, often requiring metal stakes to hold them in place. This has resulted in windy-day injuries where beach umbrellas can take flight injuring (and in one case, impaling) another person on the beach.

Just such a lawsuit has been filed by a couple vacationing in South Carolina. They blame the hotel they were staying at for failing to secure the beach umbrella that led to the wife’s injuries. The wife was struck in the face by the umbrella. The suit says that the woman’s face was “shattered” in the incident. The husband immediately responded in an attempt to get help but ended up injuring himself as he was running. The couple is suing the hotel for negligence and failure to secure the beach umbrella on a windy day, a predictable and foreseeable danger of beach umbrellas.

The answer is yes. In a case like this, the theory of negligence would fall under premises liability. In order to prove a premises liability lawsuit, you must establish that the danger that led to injury was foreseeable by the defendant. Since beach umbrellas can take flight in windy weather resulting in potential impalement, an unsecured beach umbrella on a windy day is a foreseeable danger to other beachgoers. So, the theory of negligence, in this case, is strong.

Since the danger is foreseeable, it is actionable. In most premises liability cases, the defense will attempt to establish that the plaintiff is partially or completely responsible for their injury. However, unless the beach umbrella was rented by the plaintiff who then ignored instructions on properly using the umbrella, it is unlikely that blaming the victim will be useful in this case. While the hotel can blame the beachgoer who had the umbrella, it still falls under the hotel’s duty of care to ensure the safety of their guests. In this case, the safety threat was ignored and a woman was severely injured. This case seems likely to settle and given the extent of the plaintiff’s injuries, it could settle for a lot.

Beach umbrella injuries are often extremely serious and sometimes fatal. If you have been injured in a beach umbrella incident, call the Miami personal injury attorneys at Payer Law today to schedule a free consultation and prepare for your pending litigation.

By Payer Law | Posted on August 25, 2022
We Handle All Types Of Personal Injury Cases